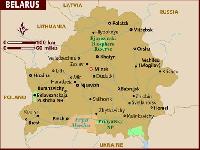 The territory of the Republic of Belarus consists of six regions divided into districts, cities and other territorially-administrative units. 66% of the population lives in cities. There are 97 cities in the Country. The administrative centers in Belarus are: Minsk, Gomel, Vitebsk, Mogilyov, Grodno and Brest. Another eight of the cities have populations over 100,000. There are over 1.8 million people living in the capital.

Byelorussians, Russians, Poles, Ukrainians, Jews and representatives of other nationalities make more than 10 million citizens who live in Belarus. The Republic of Belarus covers an area of 207 600 sq. kilometers, borders in the north and the east with Russia, in the south - with Ukraine, in the west with Poland and in the northwest - with Lithuania and Latvia. Belarus is the 13th place in Europe in size. It is approximately equal to the area of the Great Britain and Romania.

The president of Belarus is the Head of the state. The Ministerial council of Belarus is the executive power and the central state body. The government in its activity is accountable to the President and is responsible towards the Parliament.

Currently the president of Belarus is Mr.A.Lukashenko. He was elected for the first term as president in 1994.
Region: All | Minsk | Brest | Bobruisk | Vitebsk
Real estate type: All | Business centres | Retail properties | Residential properties | Other properties